Leesburg, Va. — With a berth to the VHSL 4A State championship on the line, the Dominion High School boys lacrosse team traveled to Riverside High School for the back half of a girls-boys doubleheader on June 5 in Leesburg. The Titans scored four straight goals in the game’s final eight minutes to defeat the Rams in comeback fashion, 12-11.

The biggest of the late goals came with 52 seconds left when Dominion senior midfielder Andrew Buchner scored what was the game-winning goal. The Titans’ offensive attack then won the ensuing face off and played keep away to close out the game and clinch a berth in the VHSL 4A State championship game.

“Riverside is a very good team,” Dominion head coach Pete Lenotti said. “They worked hard, and we worked hard to win this game. I’m proud of the boys tonight.” 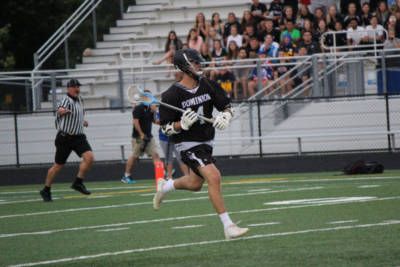 Dominion senior attack Kyle Kivinski led the Titans with five goals in their win over Riverside on June 5 in Leesburg. Full photo gallery by Michael Pittinger!

After controlling the first two minutes of the game with a strong offensive attack, the Rams turned it over to the Titans who would quickly capitalize and score ten minutes into the game. Dominion quickly added another goal a minute later to make it 2-0 Titans. Dominion eventually jumped out to a 5-2 lead thanks to the goal scoring of senior attack Kyle Kivinski, who scored two of his five goals in the first quarter.

Midway through the second quarter, a sloppy Dominion turnover allowed Riverside to score two goals in a 34 second span to trim the lead to one.

The Rams’ contestant pressure late in the second quarter resulted in a goal by Riverside senior midfielder Mason Coyle to cut the lead 6-5 in favor of the Titans heading into halftime. 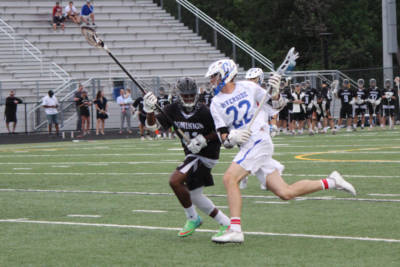 Riverside senior midfielder Mason Coyle scored early in the third quarter to even the score out at 6-6 in a VHSL 4A State semifinal. Full photo gallery by Michael Pittinger!

The Riverside momentum carried into the second half as Rams junior attack Daniel Maltz tied the game up at 6-6 less than two minutes into the third quarter. Then the Rams rallied off three goals in a span of 1:16 to take a 9-8 lead midway through the third quarter.

“[Heading into the fourth quarter,] I just told them to pick up ground balls,” Lenotti said. “Our guys were working hard and were just ready to go.”

Early in the fourth quarter it looked the defending VHSL 4A State champion Rams were on the way to the state title game for the second straight year, but Kivinski had other plans when he ended the Rams’ five unanswered goals streak midway through the fourth quarter to start the comeback. Dominion junior midfielder Zach Davis scored with a minute-and-a-half left to tie the game up before Buchner scored the game-winner 33 seconds later.

With the win, Dominion punched its ticket to the VHSL 4A State championship game on June 9 in Salem, where they will tango with Region 4D champion E.C. Glass High School.